We Had Ourselves a Pretty Great Anniversary Party

We’re pretty sure Neil Armstrong wasn’t talking about PreviewLabs when he delivered his famous line after landing on the moon, but still his words feel oddly fitting. Five years may seem like a small step in a person’s life, but to a startup company, it really feels like a giant leap. We’re very proud of what we have achieved, so we decided to throw a party to celebrate our fifth anniversary.

Part of the current PreviewLabs Dream Team, from left to right: Yentl, Andrei and Jannes. You don’t have to wear glasses to work here. But it helps.

And when we party, we do it in style! Attendees, ranging from fellow Belgian game developers such as Sileni Studios, Triangle Factory and Crazy Monkey Studios to close friends, family and a strange guy writing words for a living, were treated to a nonstop stream of high quality food and drinks. There wasn’t a single moment guests weren’t helping themselves to a tasty bite while chatting over a fine local beer or a glass of sparkling wine. 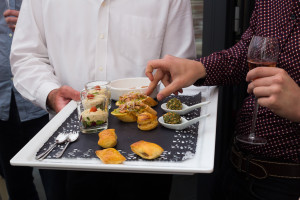 Fingerfood. And plenty of it!

When not being stuffed with delicious spare ribs or sizzling fried squid rings, invitees were able to check out some of the prototypes we have created. Among many others, we put our surgical simulation and Kinect anxiety prototype for Yale University on show, and we also let people play around with the Oculus Rift. Seeing them have fun with the things you created was very satisfying, and it convinced us even more this is what we want to continue doing for many years to come. We’ll just have to make sure our tenth anniversary party is just as fun as this one. 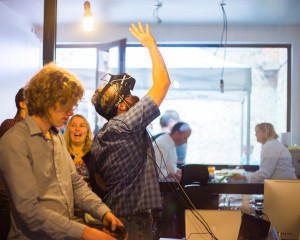 Nicolas Cybulski is trying out the Oculus Rift. You’ll be seeing a lot more of him in the future.

Thanks everyone for making this party a blast! Couldn’t make it? Check out these pictures to catch a glimpse of the fun (and food!) you’ve missed. 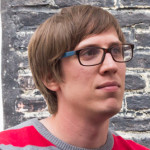