In 2013, Drs. Eli R. Lebowitz and Frederick Shic at the Yale Child Study Center were awarded one of the highest distinctions in the field of mental health research, a NARSAD Grant by the Brain and Behavior Foundation. With the grant, Dr. Lebowitz and Dr. Shic approached PreviewLabs to develop a better way to measure avoidance in children with anxiety disorders.

So, we developed YIKES (Yale Interactive Kinect Environment Software), a game prototype using motion tracking through the use of the now discontinued Microsoft Kinect. Players’ movements are triggered by objects falling down from the top of the screen, while different stimuli (spiders, starfish, etc.) are shown on the left and right. By analyzing changes in the player’s movement, YIKES is able to measure the level of avoidance.

After several years of research and multiple studies, YIKES has been proven to be effective in measuring avoidance and is now being used by researchers around the world. Using YIKES, they are able to determine the level of avoidance before and after therapy. This allows studying the efficacy of different treatment methods in large randomized controlled trials (RCTs).

Today, a paper written by Dr. Eli Lebowitz and our founder Bernard François was published in the peer-reviewed scientific paper Behavior Therapy. In the paper, they explain how YIKES acts as a new and more effective way to measure behavioral avoidance. We decided to sit down with Dr. Lebowitz to hear more about how the YIKES prototype is being used in research today around the world.

Credit for the majority of the development work on the prototype goes to our most senior programmer, Jannes Plyson, who has been involved with the project together with Bernard since the very beginning.

The following is a summary of the video.

When we fear something, we want to avoid it. This is often the biggest problem that people with anxiety face. They stay away from things and can’t function in a normal way in daily life.

Goal of the YIKES Prototype

What we wanted to do is come up with a way to measure avoidance in a way that would be more natural, that would give us better data, that would be objective, and accurate. What we’ve created is a situation in which you’re playing this game, but if you want to catch that ball that’s falling over there, you’re going to have to walk up closer to that spider. That allows us to look at how you behaved in relation to the spider, versus another image that you’re not afraid of.

What makes YIKES so Useful

One of the really great things about YIKES is that it is so versatile. Instead of spiders, angry faces are other stimuli that are more generic. As humans, we might say we’re hard-wired to respond to an angry face as a threat. If someone’s looking at you and looks really mad, you might want to take a step back. 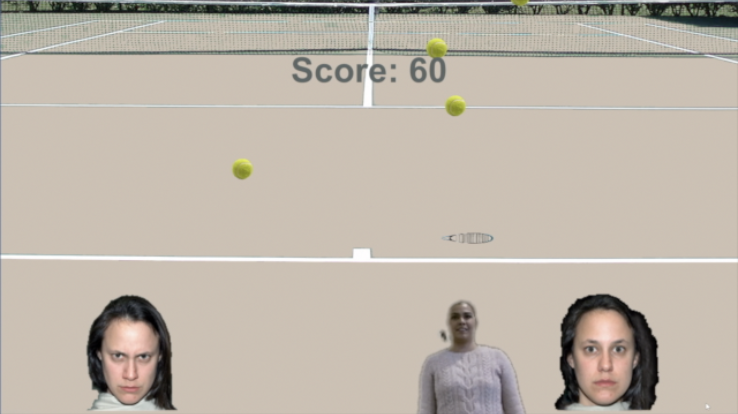 How YIKES is being used in Research Today

There are research labs currently working with YIKES. It’s used by universities in Texas and in Germany, for example. For us, we have specific studies, but we also use YIKES as part of our standard battery of assessments.

It’s really been more of a collaboration, than a service. We brainstormed how this might work, and then started iterating on that, working through a number of iterations until we said: “This is working.” It’s a very, ‘can-do’ kind of operation.