Back in March, we announced that we would take a closer look at a range of technologies, in order to find out how they could be useful for rapid prototyping.

One of the tools we wanted to have a look at was YoYo Games’ Game Maker 8. However, our investigation of Game Maker was cancelled, as we had a look at GameSalad – a seemingly similar technology – right before that, and concluded that this kind of game engines where you create games without actual programming isn’t interesting for us at the moment. 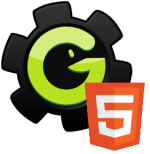 On Wednesday at the gamescom, I ran into Mike Dailly, Head of Development at YoYo Games, and took some time to learn more about their technology.

These are the two most interesting things I learned from my conversation with Mike:

While writing this post, I noticed that GameSalad also has HTML5 support.

Either way, I’ve already signed up for the HTML 5 beta release here, so we can have a closer look at the new features in September.