We pulled another one of our game prototyping programmers, Matthew Cormack, away from his screen to share a little about himself.

Q: Is it true you’re originally from Scotland? How did you read/hear/dream about PreviewLabs?

A:I’m fae Fife in bonnie Scotland, home of the great Angus McFife himself. It rains all year round and we limit summer to a week – the way it should be.

I stumbled upon PreviewLabs through a job listing. When I saw our matching orange themed websites I knew it was the company for me. At the time I participated in a lot of game jam events. My love for such game jams – which I prefer over long, continuous projects – was also a perfect match with PreviewLabs’ prototyping focus. I gladly traded in my reclusive existence in a Scottish dwelling for a spacious apartment in the great cultural hub that is Wetteren.

Q: I’m sure there must be some differences between living in a Scottish village and residing in Wetteren?

A: It seems that there are no ovens in Belgium. None. Also, you Belgians seem to loathe fresh milk, since it’s hard to find over here. Why would anyone prefer heat-treated milk over the raw stuff? Even worse, while I was desperately looking for fresh milk at the supermarket, I accidentally took raisin milk out of the refrigerator. Raisin milk! It was very bad and I was very sad.

The Schellebelle ferry takes you places

Q: Let’s focus on the job. What’s your favorite part of the prototyping process?

A: The start of a project is always a good moment. Everything’s still fresh and new. No bad smell, no ugly code, no quick fixes. However, my main motivation is finding a solution to an interesting problem. One which I’m sure I can find an answer for. I first started programming through creating modifications for games, mostly the sandbox game Garry’s Mod, and went on to study game dvelopment.

“My main motivation is finding a solution to an interesting problem. I actually learned to program through creating game modifications”

Q: What interesting games did you make before starting at PreviewLabs?

A: I’ve always enjoyed using weird and fun hardware in my games. Admittedly, not many games are easily accessible to play as a result.

My favourite game I’ve made has to be Tragic Magic. We originally constructed Tragic Magic and its custom arcade cabinet in 48 hours for the Global Game Jam of 2015. I’m sure the other participants must have hated us after the amount of noise we made drilling and hacking into that plastic container to create our beautiful duct-taped cabinet. You can check out Tragic Magic and a lot of other games on my portfolio website. It’s the best.

Q: So it seems you’ve already got a lot of experience in the prototyping field. Do you have some ideas to improve existing games or services?

A: At PreviewLabs we often play a fun couch multiplayer game during lunch break called Ultimate Chicken Horse. The competition is fierce. In my spare time, I created an automatic scoreboard that registers the winning character based on visual recognition. So I made a script that captures the winning screen and sends the data to a Trello board. Nifty, but Jannes pointed out that you could just as well use the output log of the game.

Q: You’re definitely the most hardcore gamer around here. What’s the game you spent the most hours on?

A: Steam tells me the game I’ve spent the most hours on is Garry’s Mod, with ~4000 hours or just under half a year. But as you could guess, a lot of that time was spent coding mods.

Team Fortress 2 is probably my second most played game, as you can see by my fancy hat. I still play the game almost daily with a group of friends.

This is Matthew’s alter ego; he has a very nice hat

As for singleplayer – it should be one word and you know it – the game I’ve played the most is Skyrim.

Q: We’ve seen that you have a strong opinion about certain games. What’s the most underrated game in your opinion?

A: Definitely Buggy Blasters (a prototype we’ll be able to share more about on our blog soon). I dare you to find a better game on HoloLens. It’s flawless. Still, some people seem to think it can be improved. I think those people are fools.

I should also mention Zeno Clash, a first-person fighting game by Chilean studio ACE Team. It got some critical acclaim but is widely unheard of, as far as I know. The game is weird and wonderful – a bit like me. 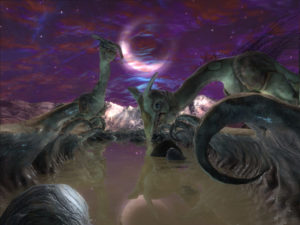 “Zeno Clash is underrated. The game is weird and wonderful – a bit like me”

A: Raccoons are the dominant species on planet earth, said to win almost 50% of all competitions they take part in. They are known to be greedy creatures, easily tricked into pursuing impossible wealth. Umm, yeah, the Raccoon is my character in Ultimate Chicken Horse. I want to be the very best in it, but my colleagues (Sheep, Bunny and Horse) often give me a run for my money.

Thank you for the delightful interview, Matthew.