Since our post on 2D game prototyping in Unity3D, Unity Technologies has been adding a number of 2D features to their engine, so here’s an update on the key features. 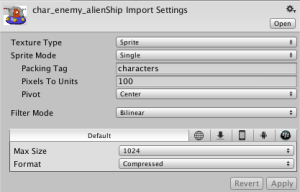 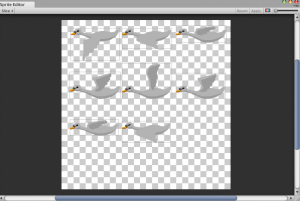 You can use these sprites and sprite sheets to create sprite animations. These are simple to make by dragging and dropping a sequence of sprites into the animation window.

Unity now has 2D physics components. Apart from a standard rectangle and circle collider, it also has a polygon collider which lets you create any shape you want.

Note that the 2D physics system completely ignores the z position of any object. The z position is only used for the render order. This means that using the 2D physics for a 2D game where you also can walk up and down (e.g. Final Fight, Streets of Rage) would be complicated. Luckily you can still use the 3D physics in combination with any of the other new 2D features.

Unity has promised and added some other features for 2D game development. One of these features is the Sprite Packer, only available to Unity Pro users. This system allows creating a sprite sheet from individual sprites images. This sprite packer system is already implemented but is still a Developer Preview and not fully functional.

To conclude, the new 2D features of Unity are a big step forward in using Unity3D for 2D game prototyping but some are still in an infancy state.