In augmented reality games, the real world is blended with a virtual world. This certainly is something that sounds very cool and triggers imagination.

There are many different ways to create augmented reality (AR) games, often using image analysis. All of these methods are using a source of real-world images, such as a webcam or a smartphone’s camera.

Some of the possibilities: 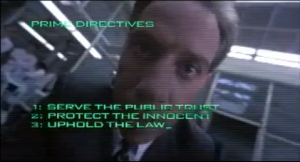 One of the first appearances of Augmented Reality I personally recall was in the 1987 movie RoboCop, where a fictional HUD commenting on real-world situations is shown.

A nice overview of possibilities that have already been tried out in games can be found in the augmented reality category at TouchArcade.

We have done substantial research on AR and developed an example prototype, which we’ll show in a next post.

One thought on “Augmented Reality”